Beavers, North America’s largest rodent, are second only to humans in their ability to engineer and alter landscapes. The wetland ecosystems beavers create benefit surrounding areas by raising water tables, replenishing aquifers, and creating environments where many different species thrive. Beavers mate for life and raise their young, known as kits, in their underwater lodges.

The beaver (Castor Canadensis, is the largest North American rodent. Most adults weigh from 35 to 50 pounds with some occasionally reaching 70 to 85 pounds. Individuals have been known to reach over 100 pounds. The beaver is a stocky rodent adapted for aquatic environments. Many of the beaver’s features enable it to remain submerged for long periods of time. It has a valvular nose and ears, and lips that close behind the four large incisor teeth. Each of the four feet have five digits with the hind feet webbed between digits and a split second claw on each hind foot. The front feet are small in comparison to the hind feet. The underfur is dense and generally gray in color, whereas the guard hair is long, course and ranging in color from yellowish brown to black, with reddish brown the most common coloration. The prominent tail is flattened dorsoventrally, scaled, and almost hairless. It is used as a prop while the beaver is sitting upright and for a rudder when swimming. Beavers also use their tail to warn others of danger by abruptly slapping the surface of the water. The beaver’s large front (incisor) teeth, bring orange on the front, grow continuously throughout its life. These incisors are beveled so that they are continuously sharpened as the beaver gnaws and chews while feeding, girdling and cutting trees. Beavers have a relatively long life span, with individuals known to have lived to 21 years. Most, however, do not live beyond 10 years. The beaver is unparalleled at dam building and can build dams on fast moving streams as well as slow moving ones. They also build lodges and bank dens, depending on the available habitat. All lodges and bank dens have at least two entrances and may have four or more. The lodge or bank den is used primarily for raising young, sleeping, and food storage during severe weather. An important factor about beavers is their territoriality. A colony generally consists of four to eight related beavers, who resist additions or outsiders to the colony shortly after they become sexually mature, at about 2 years old. They often move to another area to begin a new pond and colony. However, some become solitary hermits inhabiting old abandoned ponds or farm ponds if available. Beavers have only a few natural predators aside from humans, including coyotes, bobcats, river otters, and mink, who prey on young kittens. In other areas, bears, mountain lions, wolves, and wolverines may prey on beavers.

Beavers are in fact quite vocal. They communicate with each other via distinct grunts, grumbles, and barks. It sounds sort of like they are whining.

Beaver scat is made up entirely of wood chips. The oval pellets are 1 to 1 1/4 inches in length and 3/4 of an inch in diameter. They would most likely be found in route to or near Beaver chews if found at all since Beavers spend the majority of their time in water.

Most of the damage caused by beavers is a result of dam building, bank burrowing, and tree cutting, or flooding. In addition, beavers threaten human health by contaminating water supplies with Giardia. Beavers are hosts for several ectoparasites and internal parasites including nematodes, trematodes, and coccidians. 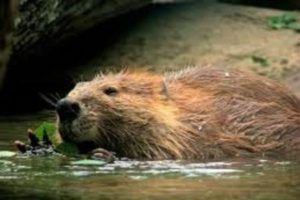 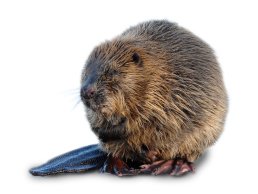