Relatives of domestic dogs, foxes live throughout the world on every continent except Antarctica. They are traditionally noted for being resourceful, intelligent, and cunning, qualities that also contribute to their status as nuisance pests. Foxes can adapt to most types of habitats found within their range, and they frequently live in areas where human activity results in the high availability of food, water, and shelter. The most common species in the United States are the red fox and the gray fox.

The red fox is the most common of the foxes native to North America. It is doglike in appearance, with an elongated, pointed muzzle and large pointed ears that are usually erect and forward. It has moderately long legs and long, thick, soft body fur with a heavily furred, bushy tail. Typically, foxes are colored with a light orange-red coat, black legs, lighter colored underfur, and a white-tipped tail. The fox weighs about 7.7 to 15.4 pounds and is found over most of North America. The fox is adaptable to most habitats within its range but usually prefers open country with some cover. Foxes have demonstrated their adaptability by establishing breeding populations in many urban areas of the United States.​Foxes are opportunists, feeding mostly on rabbits, mice, bird eggs, insects, and native fruits. Foxes usually kill animals smaller than a rabbit, although fawns, pigs, kids, lambs, and poultry are sometimes taken. Foxes sometimes kill more than they can eat and bury food in caches for later use. Foxes feed on animal carcasses at times.​Mating in foxes normally occurs from mid-January to early February. Fox pups can be born from March to May. Foxes generally produce 4 to 9 pups. Foxes disperse from denning areas during the fall months and establish breeding areas in vacant territories, sometimes dispersing considerable distances.​Foxes are most active during the early hours of darkness and very early morning hours. They do move about during the day, however, especially when it is dark and overcast.​Foxes are solitary animals except from winter breeding season through midsummer, when mates and their young associate closely. Foxes have a wide variety of calls. They may bark, scream, howl, yap, growl, or make sounds similar to a hiccup. Red foxes may dig their own dens or use abandoned burrows.

Fox tracks look like other types of canine footprints. The pests have four toes and a distinct triangular paw pad. Though similar to coyotes, fox prints tend to be narrower. They are symmetrical and typically appear in a straight line due to the animal’s alternating gait.

Foxes prey on pheasants, waterfowl, other game birds, and small game mammals. Turkeys raised in large range pens are also subject to damage by foxes. Losses may be heavy in small farm flocks of chickens, ducks, and geese. Foxes also kill young pigs, lambs and small pets.​Rabies outbreaks are most prevalent among red foxes in southeastern Canada and occasionally in the eastern United States. The incidence of rabies in foxes has declined substantially since the mid 1960’s for unexplained reasons.​​Damage can be hard to detect because the prey is usually carried from the kill site to a den site or uneaten parts are buried. Foxes usually attack the throat of young livestock, but some kill by inflicting multiple bites to the neck and back. They generally prefer the viscera and often begin feeding through and entry behind the ribs. Foxes will also scavenge carcasses, making the actual cause of death hard to determine. 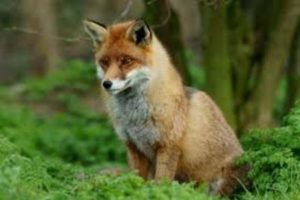 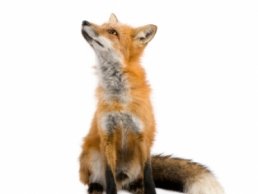