Pocket gophers, also known simply as gophers, are burrowing rodents that spend most of their lives underground. They construct their burrows by digging a main tunnel up to 18 inches below the ground and then excavating a series of lateral tunnels that branch off from the main one. This keeps gophers protected as they forage for food and raise their young. Their burrowing and tunneling activities, however, create headaches for property owners, as gopher burrows can feature up to 600 feet of tunnels marked by mounds of dirt that ruin the appearance of lawns and gardens. Gopher problems also arise when the rodents feed on garden crops, ornamental plants, shrubs, and trees.

Pocket gophers and borrowing rodents, 7 to 13 inches long and weighing 3 to 14 ounces, that spend most of their lives below ground. They are named for the fur lined cheek pouches located along side of the mouth. The pockets are used to carry food. Gophers have powerfully built forequarters with large claws on their front feet, a short neck, external ears, small eyes, and lips that close behind their large incisors. Four species of pocket gophers are found in Utah. The four species are distributed in almost entirely different areas, possibly because of different ecological requirements or competition. Plains pocket gophers are abundant in sandy and silty soils of the plains, but they are not abundant in compacted soils. The northern pocket gopher can be found in the deep, sandy soils of the plains and in the shallow gravel of mountainous areas. It is the most common species in mountain rangelands and forests. The valley pocket gopher is found mainly in soils of warm valleys in southern Utah. The yellow-faced pocket gopher inhabits a portion of the area in southeastern Utah where the plains pocket gopher is found. However, the yellow-faced pocket gopher is confined to drier sites or sites with soils that are less favorable for the plains pocket gopher. Pocket gophers attain the highest densities on light textured soils with good herbage production. Shallow soils limit pocket gopher populations because of tunnel cave-in and poor insulation from summer and winter temperatures. Pocket gophers build burrow systems by loosening the soil with their claws and incisors. Gophers then use their forefeet and chest to push the soil out of the burrow. The soil is deposited in fan shaped mounds 12 to 18 inches wide and 4 to 6 inches high. Burrow systems consist of main tunnel 4 to 18 inches below the soil surface and numerous lateral burrows extending from the main. Lateral burrows end with a soil mound or a soil plug at the surface. Burrows are 2 to 3 1/2 inches in diameter depending on the size of the gopher. A burrow system varies from linear to highly branched and may contain up to 200 yards of tunnels and several mounds. Mound building by a single gopher brings 1-1 1/4 to 2- 2 1/2 tons of soil to the surface each year. Pocket gophers usually breed in the spring and produce 1 litter of 3 to 6 young after a gestation period of about 20 days. Usually, only 1 adult is found in each burrow system except during breeding and while raising young. Six to eight pocket gophers per acre are considered high densities, whereas northern pocket gophers occasionally reach densities of 20 per acre. Young pocket gophers usually begin dispersing from the natal burrow in June, when about half grown. Pocket gophers feed on roots encountered while digging, vegetation pulled into the tunnel from below, and aboveground vegetation near the tunnel. Pocket gophers prefer aboveground vegetation that is green and succulent. Pocket gophers prefer succulent forbs in spring and summer, but they also feed on grasses. Many trees and shrubs are clipped just above ground, especially under snow cover.

Gophers are usually silent, however sometimes they emit high-pitched squeaks. Other common gopher sounds include scratching and gnawing noises.

Gophers do not hibernate, but instead burrow into the snow; often fill tunnels with soil forming worm-like cores that remain in the spring after snow melts.

Gopher droppings look very similar to rat scat, but in a greenish or grayish color. They can typically be seen scattered in their burrows, but droppings will also been seen anywhere that the gopher go.

Pocket gophers reduce the productivity of those portions of alfalfa fields and native grasslands on which they are found by 20 to 50 percent. If gophers are present on 10 percent of a field, they may reduce overall forage productivity of the field by 2 to 5 percent. Gopher mounds damage and interfere with hay harvesting equipment. Gophers sometimes damage trees by girdling or clipping stems and by pruning roots. Gophers may, at times, destroy underground utility cables and irrigation lines. On the other hand, gophers are beneficial in several ways. Their burrowing activities increase soil fertility by adding organic matter in the form of plant materials and feces. The burrowing reduces soil compaction and increases water infiltration, soil aeration, and the rate of soil formation. 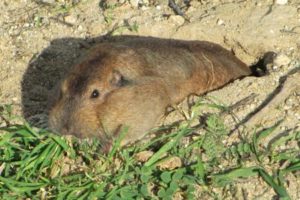