Wasps and Hornets build communal nests by chewing wood to make a papery pulp. Each nest has one queen, who lays eggs and is attended by workers who, while genetically female, cannot lay fertile eggs. Most species make exposed nests in trees and shrubs, but some (like Vespa orientalis) build their nests underground or in other cavities. In the tropics, these nests may last year-round, but in temperate areas, the nest dies over the winter, with lone queens hibernating in leaf litter or other insulative material until the spring.

Adult hornets and their relatives feed themselves with nectar and sugar-rich plant foods. Thus, they can often be found feeding on the sap of oak trees, rotting sweet fruits, honey and any sugar-containing foodstuffs. Hornets frequently fly into orchards to feed on overripe fruit. Hornets tend to gnaw a hole into fruit to become totally immersed into its pulp. A person who accidentally plucks a fruit with a feeding hornet can be attacked by the disturbed insect.

The adults also attack various insects, which they kill with stings and jaws. Due to their size and the power of their venom, hornets are able to kill large insects such as honey bees, grasshoppers, locusts and katydids without difficulty. The victim is fully masticated and then fed to the larvae developing in the nest, rather than consumed by the adult hornets. Given that some of their prey are considered pests, hornets may be considered beneficial under some circumstances.

A wasp can be identified by its slender, yellow abdomen and long wings. When your property has a wasp infestation, you may notice several of these insects swarming around a single area. If you find the visible signs of flying wasps, you may want to contact an exterminator immediately.

One of the top signs that your home has a wasp problem is when nests become visible on your property. Depending on the species of wasp, the nests may be constructed from chewed wood or mud particles. Since the wasps will naturally defend their nesting area, you should always call in a professional exterminator to help you deal with the issue. Your exterminator can safely and effectively eliminate your wasp problem for good.

While wasps & hornets commonly build their nests under the eaves of a roof or slip beneath shingles and cracks to enter the attic, they don’t usually leave any damage behind. A colony of hornets or wasps will take advantage of cracking or splitting wood to slip inside, but the presence of a colony often means damage was already there. 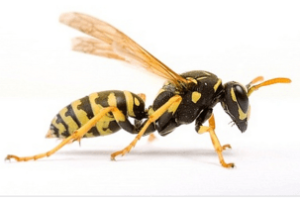 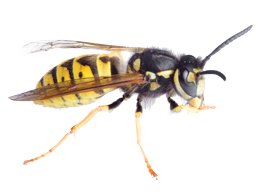 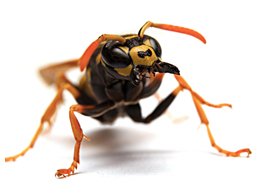 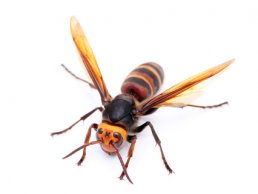