Though their name loosely translates to ‘quill pig,’ porcupines are not related to pigs in any way. In fact, porcupines are the second-largest North American rodent after beavers. Their quills are primarily used as a defense mechanism, though, contrary to popular belief, porcupines cannot shoot them at predators. Instead, they lash their tail and embed their quills in the skin of their enemies. Each porcupine has approximately 30,000 quills on its body.

In Utah, porcupines occur throughout the mountains and on woodlands of the state. The porcupine is heavy-bodied, brown to black in color, and has a small head, short legs, and a short, thick tail. Its sharp, barbed quills, 1-1/4 to 4 inches long, cover most of the upper body surface and the tail. Only the face, the under parts of the body and tail are without quills. The quills can be raised and lowered at will but cannot be thrown, although they do come out easy. When disturbed, the porcupine will raise its quills and take a defensive stand. It may whirl or lunge at its opponent, and any attacker will receive a sharp slap from the porcupine’s tail. The barbed quills are driven into the flesh of the attacker, pulling free of the porcupine. The victim’s own movements further embed the quills. This results in intense irritation and even death if the quills that pierce the nose, mouth, tongue, or other areas around the head are not removed. The affected parts may become infected and swollen. ​Porcupines normally sleep in dens or trees during the daytime and do most of their moving and feeding at night. The ears are small and almost hidden in the fur. Adults weigh 10 to 20 pounds or more and measure 2 to 3 feet long. ​Porcupines reproduce once a year, giving birth to a single offspring in the spring. On rare occasions, twins are born. For a rodent the 7-month gestation period is unusually long. The young rely on their mother for a very brief period following birth. ​Excellent climbers, they spend considerable time in trees, especially in winter. In summer, they have been known to travel several miles from the nearest forest to feed in open meadows and fields and along the banks of streams and lakes. The porcupine makes its den in hollow trees or logs, crevices of rocky ledges, or beneath buildings, if it can gain access. ​Signs of porcupines are fairly easy to detect. In snow, they leave a trough-like trail about 10 inches wide. In soft soil or mud their tracks tend to toe in and impressions from the long claws are often evident. ​Quills are commonly found in feeding areas but appear also along trails. The droppings measure 0.75 inch long and 0.5 inch in diameter and are generally abundant in areas where they feed and near their dens. In winter, the droppings look like compressed sawdust or excelsior from feeding on bark and twigs. In summer, the droppings may be harder to identify, because more succulent vegetation is being consumed. ​In winter they feed primarily on the inner bark, cambium, and phloem tissue of a wide variety of forest trees, including ponderosa pine, pinon pine, cottonwood, spruce, elm, and poplar. ​In spring, they may eat flowers, buds and young leaves of trees. They eat a wide variety of plant foods, including some cultivated crops or home gardens, especially if they are near forested or wooded areas.

Porcupines have a reputation as tough customers because of their sharp quills. Less well known is the fact that they also use noises to warn away predators. People may notice several porcupine sounds when the animals are nearby.

Humans are most likely to hear porcupine noises if the animal feels threatened. In such a situation, the porcupine will clack its teeth before straightening its quills in a defensive posture and swatting its tail.

During the porcupine mating season, people may also hear a host of sounds including whining, moaning, and grunting. Other noises include wails and shrieks.

If two males are fighting over a female, agitated howls may be audible. Some porcupine sounds at night may be similar to a bird’s caw.

Signs of porcupines are fairly easy to detect. In snow, they leave a trough-like trail about 10 inches wide. In soft soil or mud their tracks tend to toe in and impressions from the long claws are often evident.

The droppings measure 0.75 inch long and 0.5 inch in diameter and are generally abundant in areas where they feed and near their dens. In winter, the droppings look like compressed sawdust or excelsior from feeding on bark and twigs. In summer, the droppings may be harder to identify, because more succulent vegetation is being consumed.

Damage to trees from bark gnawing around buildings or objects that contain salt and quite easily be identified as the work of porcupines. Porcupines sometimes invade landscaped yards and family fruit and vegetable gardens and eat a wide variety of succulent plants. ​Porcupines near homes, summer cabins, logging camps, campgrounds, and other outdoor recreation areas can become troublesome. They gnaw the wooden underpinnings of buildings and even the siding or doorframes of buildings. They have a particular liking for some types of plywood, apparently because of the glue used in the laminating process. ​This animal is attracted to human habitats because of its strong craving for salt. Porcupines will chew or gnaw on tool handles, wooden wheelbarrow handles, boat oars, porch furniture, toilet seats, saddles, or anything else that may contain traces of salt from perspiration or other sources. Porcupines are regarded as an attractive nuisance to dogs. Inexperienced dogs may end up with a mouth and nose full of quills that a veterinarian may have to remove. ​Porcupines are known to harbor some diseases, such as Colorado tick fever, which can infect humans, but close contact between porcupines and man in relatively uncommon. ​ 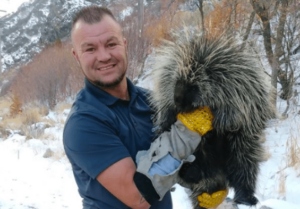 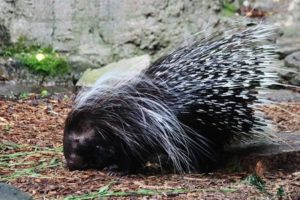 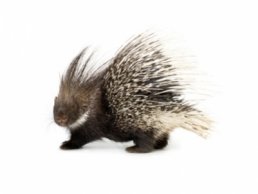