Snakes are scaly, legless reptiles that slither across the ground and constantly taste the air by flicking out their forked tongues.

Snakes are reptiles. They have scales, are exothermic and must rely on external source to control their body and temperature, and like most reptiles they lay eggs. Snakes often shed their skin more than once each year to accommodate their growing bodies. Snakes must avoid extremes in temperatures and they prefer to hunt during mild conditions. Their forked tongues and heat sensitive facial pits are used to determine what exists in their environment and to acquire prey. Most snakes prey predominantly on rodents, although some will also eat bird eggs, nestlings, and insects. Snakes such as garter and gopher snakes and racers may occasionally be pests, but they are nonvenomous.​Of the 32 species of snakes inhabiting Utah, the western rattlesnake the southwestern speckled rattlesnakes, the Mojave rattlesnakes, and the Mojave Desert sidewinders are the only venomous species. The western rattlesnake appears in most habitats throughout the state. The other three venomous species are in Washington County in southwestern Utah. There are four subspecies of western rattlesnake, with the great basin rattlesnake being most common. Rattlesnakes give birth in the autumn to hatches of 5 to 12 young, approximately 8 inches in length.

Most snakes make some kind of noise, whether it’s hissing, rattling, or rubbing their scales together to make a dry, raspy sound.

Since they have no limbs, snakes travel in intriguing ways across sand, soil, and dust. Snake tracks can appear in a number of different forms that depend on the type of snake, its size, and the kind of terrain. Most often, the pests move in a curved, S-like motion, bending their bodies from head to tail and pushing against surrounding surfaces. This type of movement is called lateral undulation, and many species leave these snake tracks in sand or dirt. As the pests live in warm regions or hibernate during cold winters, snake tracks in the snow are seldom seen. Moreover, large or thick species sometimes travel in a direct line and leave straight snake tracks in the dirt.

It smells, it’s often brown, and it happens as often as the animal eats. Snake poop, especially that of snakes with a rodent-rich diet, is an oblong, liquid excretion with a white cap of urea. This combination of kidney waste and intestinal waste is due to the fact that snakes have a cloaca.

Snakes may take up residence under and possibly inside buildings. This behavior may become more noticeable in the fall when snakes begin seeking areas to hibernate for the winter. Nonvenomous snakes do not pose major problems for humans. A dead rattlesnake cannot strike, but the head, even decapitated, is still capable of biting and injecting poison. The snake’s heat sensory pits are active until rigor mortis sets in and they can trigger a biting response if a warm object, such as a hand, is placed near the snake’s mouth. 30 31 If bitten by a rattlesnake, remain as calm as possible because panic may actually trigger adverse physical reactions. Since there is a single antivenin available for use against all rattlesnakes in the United States there is no need to deliver the snake for identification prior to medical treatment. 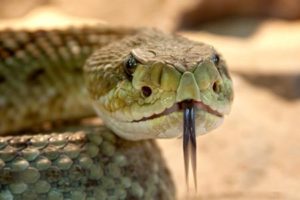 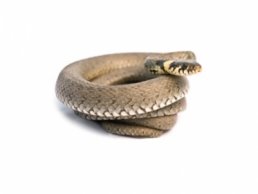 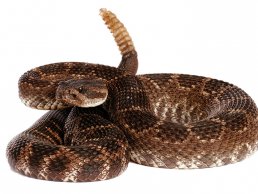