Commonly called meadow mice, voles thrive in both grasslands and mountainous areas. They can be found throughout the United States and feed on a variety of plants. Their feeding habits damage growing trees, lawns, and gardens.

Voles, also referred to as meadow mice, are small mouse to rat sized rodents. They are pudgy, with blunt faces, small eyes, short ears, short legs, and a short tail. Eight species of voles are widely distributed throughout the various ecosystems of Utah.​Voles are adapted to digging and build many tunnels and surface runways with numerous burrow entrances. They are active throughout the day and do not hibernate in winter. Vole activity is closely tied to the grasses that are their primary food.​Voles can be reproductively active throughout the year. The average number of litters varies from 3 to 12, with the number of young varying from 3 to 6 per litter. Due to their active nature during winter, they are a valuable food source for owls, foxes, coyotes, and other predators.

Voles are social rodents, so noises are a primary means of communication. When frightened or in danger, the pests emit chirps similar to those made by mice. However, the high frequency of many vole sounds is beyond the human hearing range. Voles also make rustling noises as they run through their burrows.

When the snow melts from your yard, you may notice little pathways in your grass. These pathways are caused by voles (not moles), which are also commonly referred to as meadow mice. Voles tunnel under the snow and eat the grass clippings during the winter months and also use the grass to build nests.

Vole droppings look very similar to mouse scat, but in a greenish or grayish color. They can typically be seen scattered along their trails and in their grassy nests, but droppings will also been seen anywhere that the voles go.

Vole cause many types of damage. They feed on and girdle nursery stock, fruit trees, and ornamental plantings. They damage lawns by building runways under the snow. They also damage root crops, bulbs, and tubers. Most damage by voles occurs under the snow during the winter. 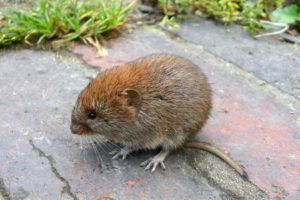 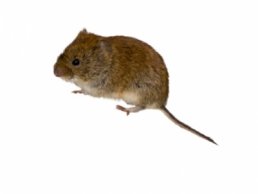