There are several types of North American weasels, including least weasels, long-tailed weasels, and stoats or short-tailed weasels. Predatory by nature, weasels mostly eat small rodents, are notorious for occasionally stealing chicken eggs, and sometimes participate in surplus killing sprees that leave entire families of chipmunks and other small animals dead. Contrary to popular belief, however, weasels do not kill other animals solely for blood.

Weasels are active in both winter and summer; they do not hibernate. Weasels are commonly thought to be nocturnal but evidence indicates they are more diurnal in summer than in winter. Home range sizes vary with habitat, population density, season, sex, food availability, and species (Svendsen 1982). The least weasel has the smallest home range. Males use 17 to 37 acres (7 to 15 ha), females 3 to 10 acres (1 to 4 ha). The short-tailed weasel is larger than the least weasel and has a larger home range. Male short-tailed weasels use an average of 84 acres (34 ha), and females 18 acres (7 ha), according to snow tracking. The long-tailed weasel has a home range of 30 to 40 acres (12 to 16 ha), and males have larger home ranges in summer than do females. The weasels appear to prefer hunting certain coverts with noticeable regularity but rarely cruise the same area on two consecutive nights. Weasel population densities vary with season, food availability, and species. In favorable habitat, maximum densities of the least weasel may reach 65 per square mile (169/km2); the short-tailed weasel, 21 per square mile (54/km2); and the long-tailed weasel, 16 to 18 per square mile (40 to 47/km2). Population densities fluctuate considerably with year-to-year changes in small mammal abundance, and densities differ greatly among habitats. Weasels, like all mustelids, produce a pungent odor. When irritated, they discharge the odor, which can be detected at some distance. Long-tailed weasels mate in late summer, mostly from July through August. Females are induced ovulator’s and will remain in heat for several weeks if they are not bred. There is a long delay in the implantation of the blastocyst in the uterus, and the young are born the following spring, after a gestation period averaging 280 days. Average litters consist of 6 young, but litters may include up to 9 young. The young are blind at birth and their eyes open in about 5 weeks. They mature rapidly and at 3 months of age the females are fully grown. Young females may become sexually mature in the summer of their birth year.

Weasel sounds serve a variety of purposes. Loud, high-pitched squeaking is usually a response to a threat, while trills and low whistles are friendly greetings. Noises range from soft barks and hisses to chirps and calls.

When frightened or cornered, weasels may hiss or create shrill warning squeals. Many species are nocturnal, so these noises often occur at night. Loud weasel sounds in the yard can keep residents awake.

The scat that weasels leave behind is similar between species, with the exception that the smaller types create smaller scat. The color is normally a dark shade of black or brown. The scat is thin, long, usually in segments and tapered at one end. In many instances, weasels scat contains small pieces of bone or the hair of its latest meal. Search for this sign of weasels on logs, stumps or rocky outcroppings, where weasels like to defecate.

While many homeowners benefit from the presence of weasels as they often control rodent populations, weasels can be a nuisance when they gain access to poultry houses and prey on fowl or pets.

Signs of weasels and their damage include: 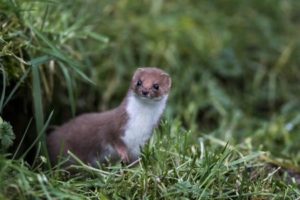 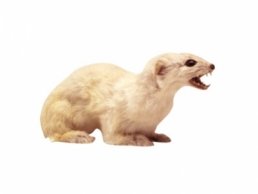